From the shadow conjurer Justinus Kerner to the soul researcher Hermann Rorschach to Jack the Dripper, the painter of the unconscious Jackson Pollock.

Man has always sought techniques and methods to approach the unconscious and interpret his images and archetypes. The unconscious is regarded as the gateway to inspiration and to the other world, which creates a strong fascination for man. A technique to illuminate the unconscious is that of klecksography. In modern psychology, the well-known and controversial Rorschach test follows the tradition of mystical ink blotches.

In the Beyond of the Other-Objective

The emergence of creative thinking seems to have something to do with the contemplative and aimless devotion to the perception of naturally evolved, amorphous patterns.

At all times people assumed that there must be occult realms behind the reality of everyday things. Hidden knowledge, secret insights and invisible beings.

In order to gain access to this hidden world, all kinds of magical practices served.

A pioneer in art was found in the doctor, poet and draughtsman Justinus Kerner (1786-1862). His approach to the other reality consisted in the devotional production of blot pictures. he made almost over 1000 Klecksografien arose over the years. 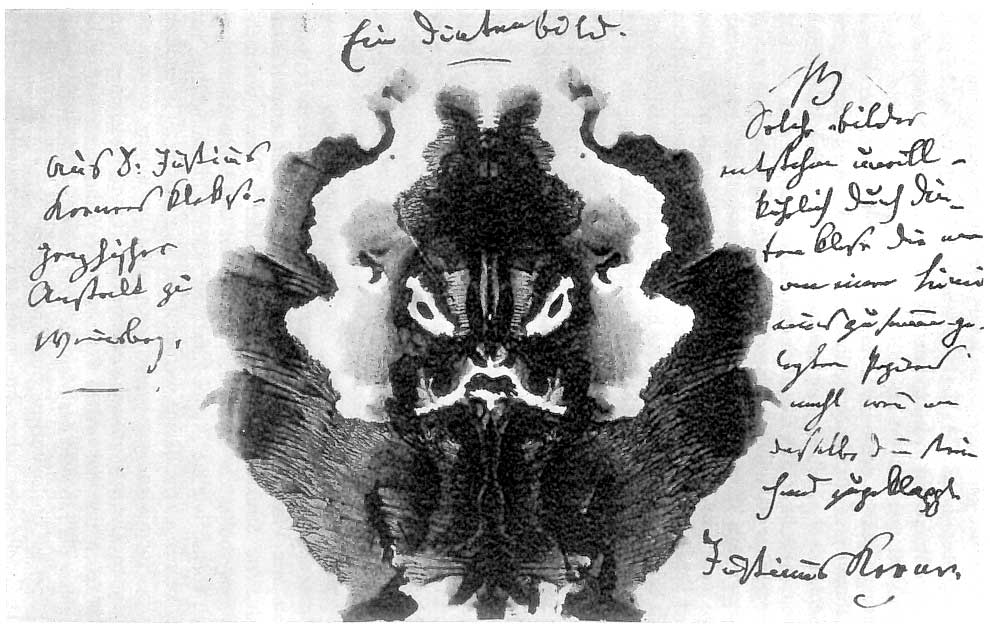 Kerner was convinced that spiritual beings exist in the non-visible areas of nature.

He assumed that there is a ``general life`` of people, spirits and stars, where everything is connected, interacts and touches each other.

With the help of ink and occasionally also coffee, he captured archetypes from the night and intermediate realms on paper, which he put together in a notebook, the “Hades- und Höllenbildern” (published posthumously in 1890) and commented with verses, often very humorous.

“These pictures from Hades,
All black and gruesome
(Ghosts are, very inferior degree),
Have formed themselves
My tongue’s against me, to my horror,
Only – from ink stains.
I always thought,
Everywhere where it’s black and night,
Spooket the spooky race,
That’s why it’s in the inkwell.
You who write, be careful!
Because I discover klecksograph,
That in the inkwell often sticks
The power of a poisonous demon.”

Kerner notes that when you do blot the images, you can never produce what you want, and that often the opposite of what you expect occurs, but that it is precisely this accidental emergence of the images that gives the imagination “tremendous scope”. For him, many of these pictures carry the “type of long-forgotten times from the childhood of old peoples”. Kerner had already made drawings in his earliest youth by crushing small, colouring berries and fly heads on folded paper. Later, as an adult, he dripped ink on paper. Symmetrical drawings were created: Arabesques, animal and human images.

From klecksography to inkblot test

Hermann Rorschach (1884-1922), who first wanted to become an artist, finally studied medicine in Zurich and worked as a psychiatrist in Swiss psychiatric hospitals. The dissertation of a Swiss colleague, Szymon Hens (“Phantasieprüfung mit formlosen Klecksen bei Schulkindern, normalen Erwachsenen und Geisteskranken”), which appeared in 1917, gave him the idea for the development of his method of interpreting form, the Rorschach Test. Before Hens and Rorschach, other researchers had already used blot formations as stimulus material in their investigations. 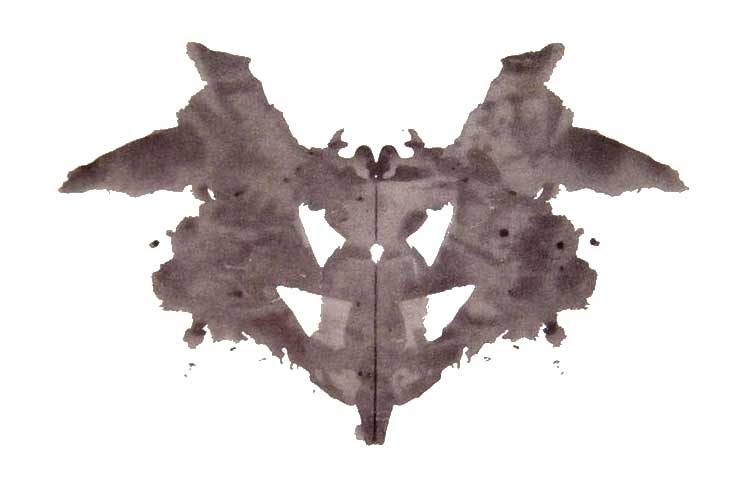 Rorschach’s goal: He wanted to offer a globally applicable test procedure (based on Sigmund Freud’s depth psychology) that would represent an objective method for diagnosing the entire personality. The interpretation of a Rorschach protocol is expected to provide information on cognitive and affective aspects as well as on the ego structure. Rorschach hoped to be able to make occult material from the psyche of his test persons visible with the ten blot images he provided. Since the Rorschach test (first of all) knows no correct and no wrong answer, the test subject can express himself seemingly unbiasedly. Nothing slows down the associations and attributions. However, the tester is determined by a multitude of predefined criteria during his evaluation. Clinical psychologists also expected the Rorschach test to be a method that would cause patients to reveal their private world. “He tells what he ‘sees’ on the various panels and projects his feelings and thoughts because the panels do not represent socially standardised objects to which culturally prescribed answers exist. The respondent is not aware of what he is saying in his answers. He can’t hide behind cultural norms. Knockers and Davidson finally let the cat out of the bag when they write:

»In the Rorschach situation you don't know what the right, best or typical answer is. Everyone has to react in his own specific way. By answering in this way, one unintentionally or unconsciously reveals precisely those parts of the ego that one does not fully know oneself.«

The psychologist’s aim is to uncover hidden, hidden sides of the subject’s personality with the magic of klecksography. However, in-depth knowledge of psychoanalysis is an indispensable prerequisite for the interpreter. This is where the weaknesses of the method lie.

If you would like to learn more about the Rorschachs Test, you can order the complete article as a pdf below.

In 1937 the painter Jackson Pollock (1912-1956) went into therapy with a Jungian-oriented psychiatrist for alcoholic derailments. Since he found it difficult to talk to his therapist about himself and his problems, he brought sheets from his sketchbook as a non-verbal contribution to the sessions.

Around 1946, Pollock made a name for himself with blotch pictures. The surrealist painter Max Ernst (1891-1976) had given him the idea of dripping, pouring, blasting, spraying, letting paint run and flow, blotting, dabbing, wiping, on the canvas lying on the floor. With his wild dripping of colours without a plan, Pollock hoped to have found a valve for the demons inside him, his panic-stricken fears, his severe depressions and attacks of aggression.

He hoped freely, according to C. G. Jung, that his unconscious could become the source of his art.

He saw himself as a medium from whose unconscious, the art flows out without control. Pollock was not interested in working according to nature, but like nature, parallel to nature. Accordingly, he could say: “I am concerned with the rhythms of nature. I work from the inside out, just like nature.” He also vehemently resisted the assertion that his pictures were characterised by chaos and were created purely by chance. They should rather be understood as manifestations of energy and movement as well as of memories stored in the body’s memory.

Many who believed that Pollock’s blob paintings were worthless and not art (“works of a delirious lunatic”) were taught better in 2006. His painting “No. 5 1948” was bought in 2006 by a Mexican collector for 140 million dollars. The “accidental splash” thus turned into a work of art of the highest value. Link to the art work

If you want to know more about Jason Pollock, for example what he has to do with Max Ernst, Juddi Krishnamurti and C.G Jung, order the complete article as a pdf below.

Jackson Pollock tried to get a shamanistic access to the contents of his unconscious by making his blot pictures. He wanted to make his fears, compulsions, and inner torments visible through the process of color dripping and turning them into art. He received the spark for his actions through a trance state, a kind of self-hypnosis, into which he put himself in his artistic work. This process of self-expression, in the act of self-opening from the inside to the outside, was intended to heal him and put him in a state in which he was in harmony again with his nature and with nature as mother of all and in which he could happily say: “I am nature. 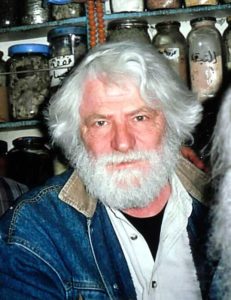 This version consists of excerpts from the original article. 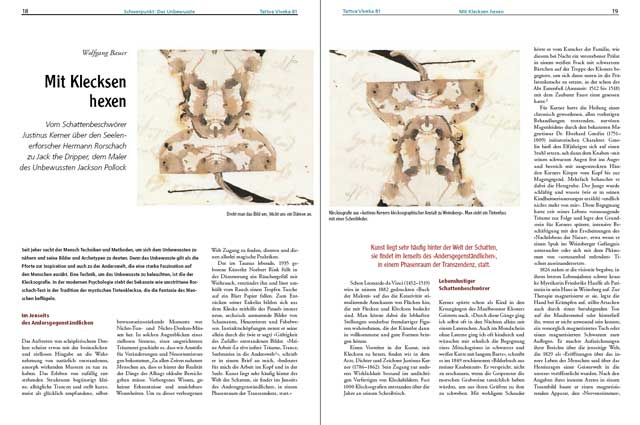 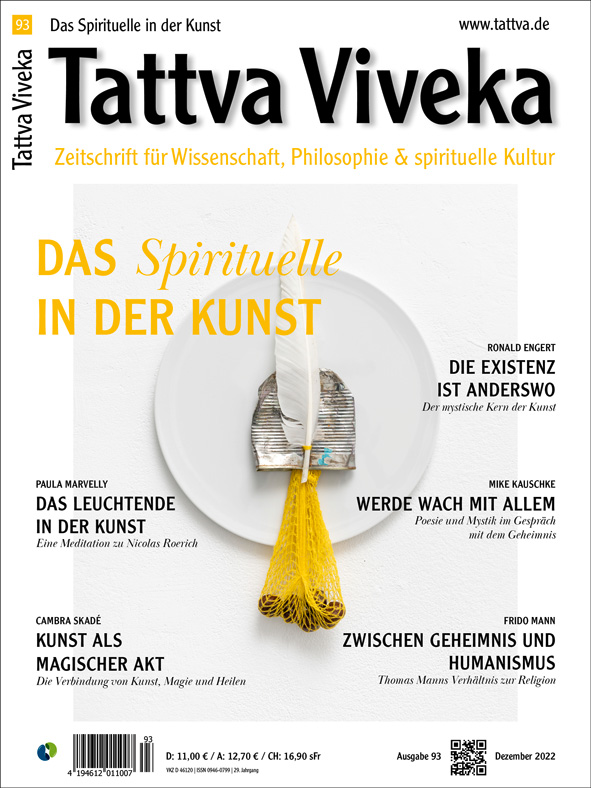